Whether you are a chef at a 5-star restaurant looking to make every meal special, or a fisherman wanting to have the best chance of hooking that special fish, you won’t be disappointed with the quality of our product.

We bring to you some of the finest quality wild caught fish to ever leave the ocean.

Every single fish we catch is handled with the care and respect it deserves.

Every fish we sell is sashimi grade, the best of the best.

We are a small, family owned and operated fishing business based at Kurrimine Beach, Nth Queensland. I am the skipper and fisherman on every single fishing trip. With help from my partner Kim, my father Wayne at times, and 1 or 2 deckhands, I am hands on with every part of our business. From catching the fish, cleaning boats, taking orders, packing fish, or just having a good old yarn with customers, I am there. I believe this is the only way to ensure everything is up to the standard our customers expect.

Our line-caught reef fish are killed instantly and humanely using the ike-jime method. Fish are bled well and immediately placed into a salt ice brine to bring their temperature down to 2oC. Once this is achieved, every fish is gently hand-packed, one by one into our custom-made fibreglass eskies and covered with flake ice. 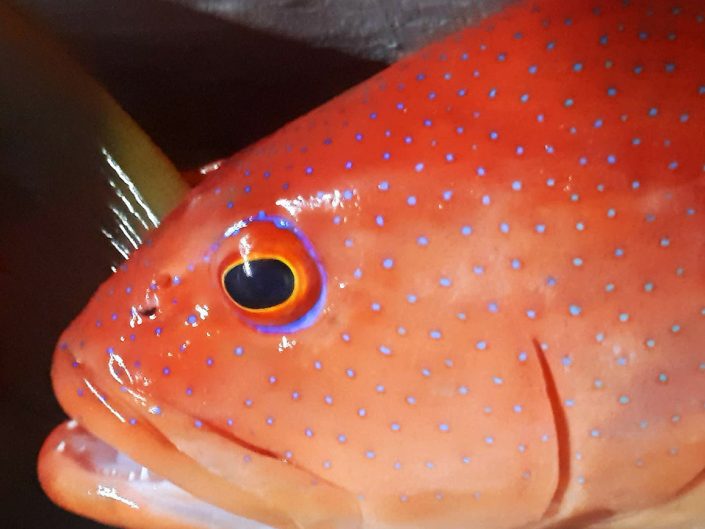 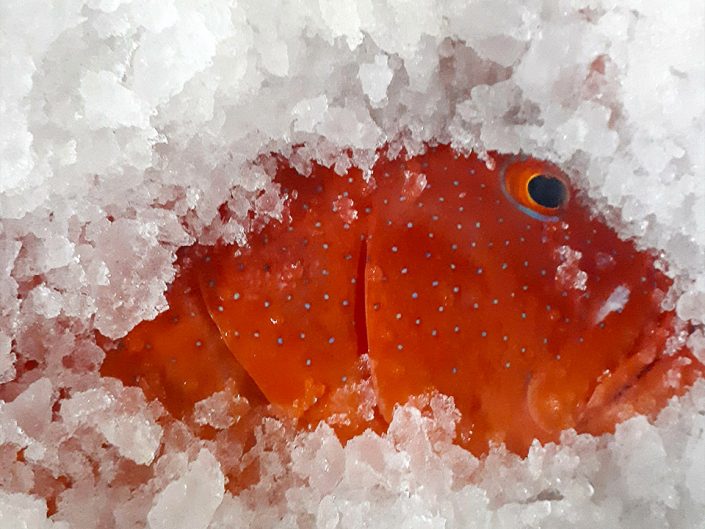 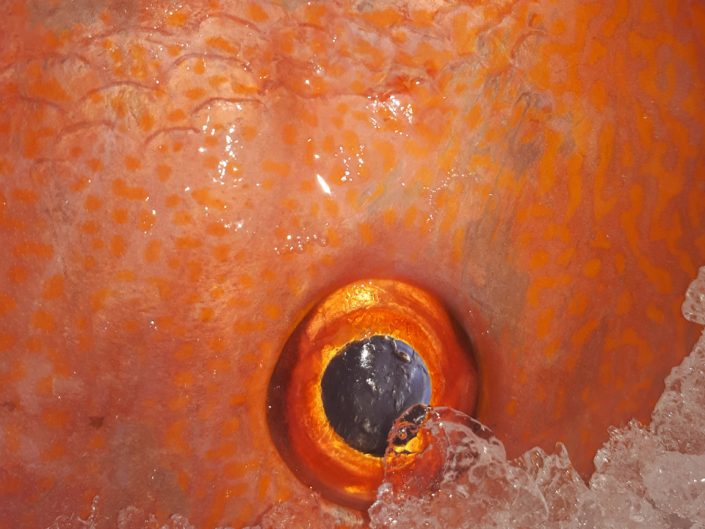 Having small, fast boats means we don’t catch large quantities. It means our fishing time is very short – very rarely more than 24 hours fishing before returning to port, with some trips as short as 6 hours.

When returning to port, we don’t unload at the wharf. Our boats are winched onto a trailer, towed by an ex-sugar cane haul-out tractor, and the catch is driven right to the door of our coldroom and packing facility, which was designed and made by myself to suit the way we operate. Our catch is unloaded from the boat and immediately packed for transport, with minimal handling and in the shortest possible timeframe.

Air freight is our preferred method of transport, unless we are supplying to the local area of course.

We can have any and every fish we catch delivered to anyone, anywhere in Australia within hours of being caught…

All at premium quality. 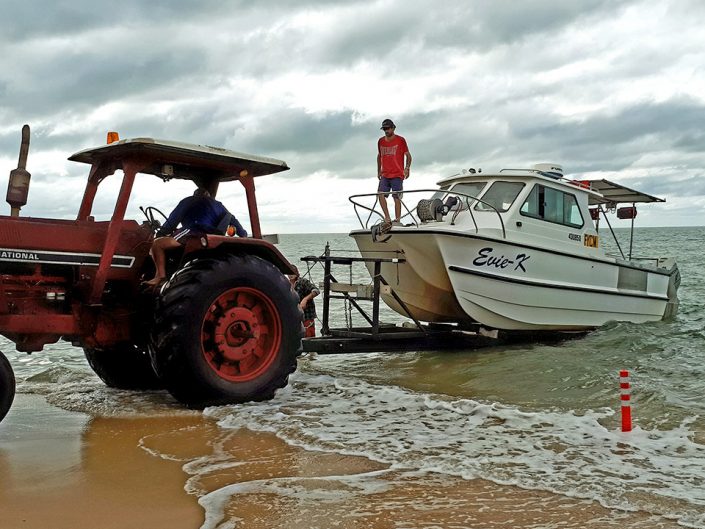 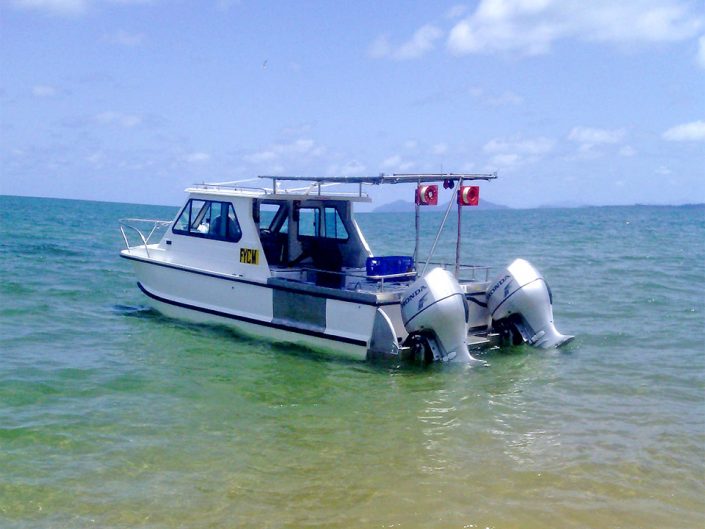 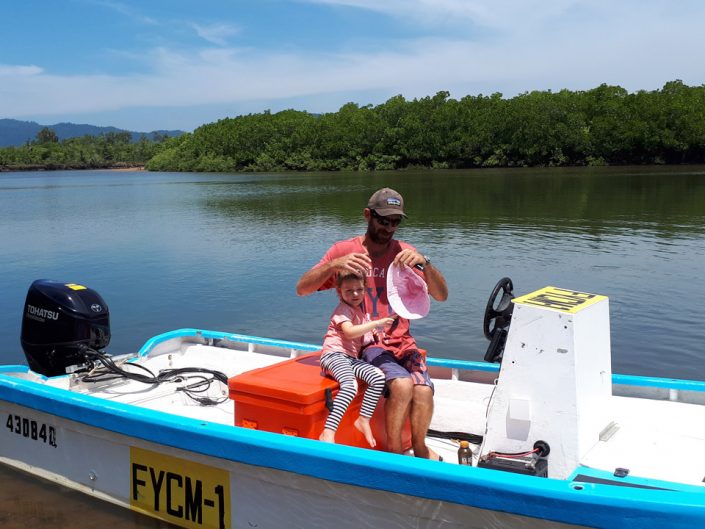 Wild caught fish is one of the healthiest foods on the planet.

These fish aren’t fed processed pellets, or had any hormones or antibiotics in their system.

They have lived a life most of us dream of — a life in the clean waters of the Coral Sea, amongst the beautiful Great Barrier Reef.

Every day they are eating delicacies such as squid, sea urchins, prawns, sardines, fusiliers, garfish, crabs and more. Is it any wonder they taste so good?! 100% pure organic, natural food. The way nature intended. 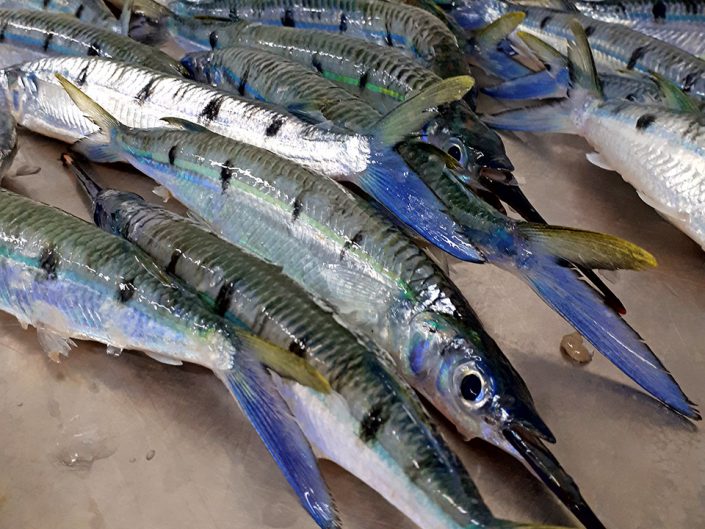 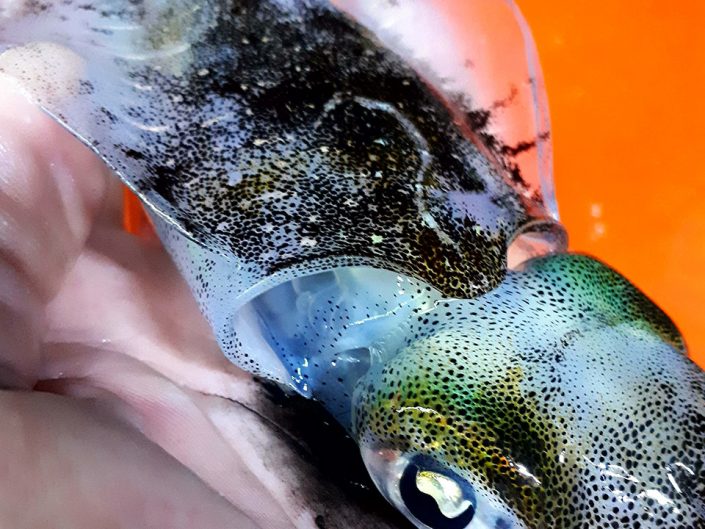 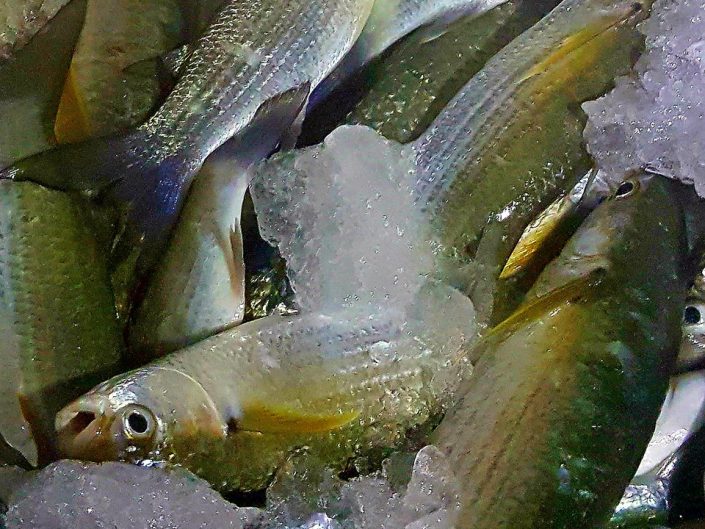 If healthy eating, premium quality, and sustainability are your concerns, be concerned no longer.

Supplying Australia with healthy, sustainably and responsibly caught, premium quality fish is our job. And we take our job very seriously. 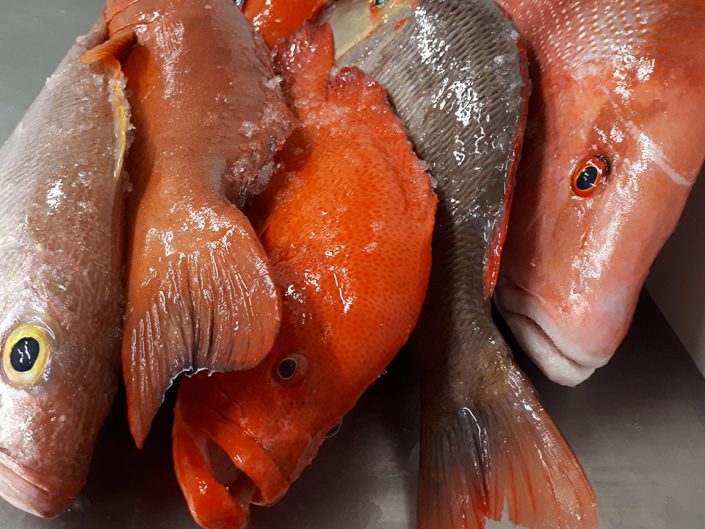 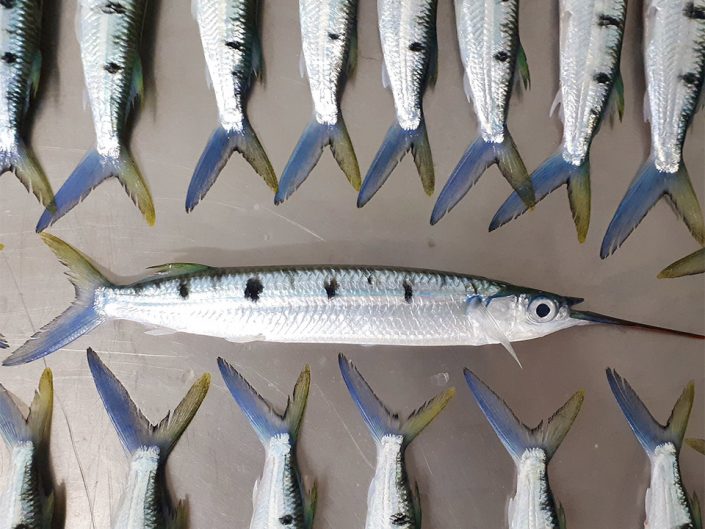 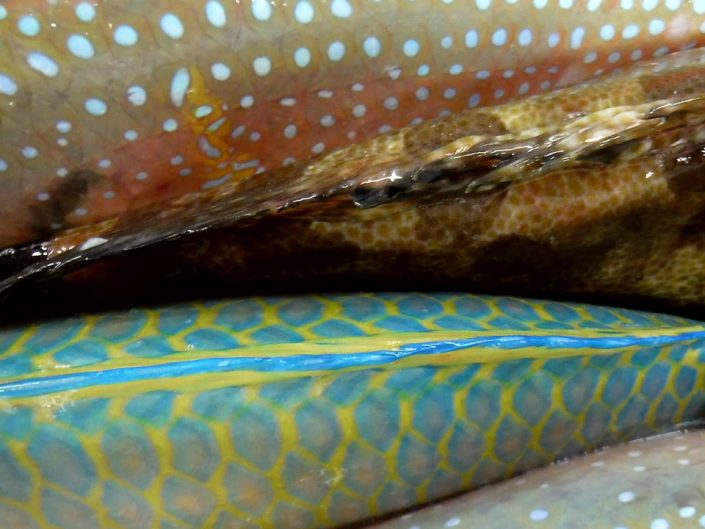 Proud to be Reef Guardian Fishers

As a commercial fishing business, we rely on a healthy, sustainable environment.

The Great Barrier Reef is more than just a place we rely on for our business, its our life, its our families life, and we want it to stay that way for generations to come.

Something interesting I saw this morning. ... See MoreSee Less

That's pretty cool mate, iv heard they like to show off there catch and or share it around ,wild eating a toad fish and only the head being a toad fish 👍cool as

I've never heard of false killer whales. You get to have all the fun 😊

Starting to get a lot of calls and messages about bait, and gar season is just around the corner so I thought I'd put this up.
This year we'll likely be catching/supplying far less bait than in previous years. And the price will certainly higher.
I'll explain some of the reasons below.

Reef fishing is our primary concern. We're operating a far bigger line fishing business than we were previously. The work involved in keeping that running smoothly is a massive job itself. I wont go into it, but we simply don't have the time to be doing night after night bait fishing.
The money just isn't there for bait. All said and done, I have been bait fishing for around $15/hr on average. Kim was spending hours packing bait for roughly the same. Crew was much the same. Can anyone honestly tell me they'd work long hours, and often in unpleasant conditions for $15/hr?
Costs have probably near doubled since last season. So at last year's prices, the equivalent hourly rate would be even lower again.
Bait fishing can't be done alone, so crew have to make money as well. One problem we've always had with bait fishing is working out how we can pay decent money to crew, as well as make money ourselves. Without my Dad helping for free in previous years, we wouldn't have been doing it.
Fisheries rules and regulations. Some of the ridiculous rules and regulations now involved make it very difficult to avoid fines. A couple of examples- we have to carry logbooks in the boat at all times, and they must be filled in prior to coming back to a boat ramp. Now, in a 5m open boat, quite often operating in rain, wind, and rough weather, filling out a paper Logbook is virtually impossible. Get caught without the logbook filled in and I cop a fine 🤷‍♂️
Then there's the ringing in prior notices. We have 24/7 satellite tracking on ALL boats, but still, for some unknown reason, we have to ring Fisheries Queensland every single time we go fishing and let them know locations of where we are returning to. Some nights bait netting I'll come and go from 2,3, sometimes 4 different boat ramps. So 4 pages of logbooks, and 4 phone calls required. Tired and busy, it would only be a matter of time before I forgot to make a call. And because we are satellite tracked 24/7, FQ knows full well of where I am and what I'm doing. The minute I forget or make a mistake, which is bound to happen sooner or later, I'm issued a fine and out the window goes my profit. Not only that, I get a mark against my name....all over a completely ridiculous rule 😩
Anyway, just thought I'd put it out there rather than answering endless messages about what im doing in regards to bait supply this year. ✌️ ... See MoreSee Less

Thanks for sharing and updating us all mate. You provide a premium service and product. Please cover yourself and operation by charging a premium price.

That’s the price you pay for quality and unfortunately the price your paying for poor fisheries management an other people doing the wrong thing. We would be happy to pay whatever is needed to make it worth your while because the quality is there.

Wonderful bait, electric blue, fresh as can be. Best bait ever! Mondoras

The only thing the government is trying to keep sustainable is their jobs..too many hoops to jump over now, that’s what ruined the wild pork industry…

I cannot believe QF would get out of bed to catch you not filling out a form when there’s a fishery to manage. 🤣

Mate id pay $30 for a 5/6 pack of your gar! Everyone gotta make money to male it worth while! Id rather pay you $30 then had imported crap for half the price! Do what you gotta do man!

If people want the best they will pay for it mate. It's bloody hard running a business where people expect the price you were 2 years ago. Just need to do what you do to make it work for your end mate. If people don't understand that them they aren't worth worrying about

And after all of those excellent reasons you have to throw the unfortunate fact that many of the guys that are using your bait are the reason for all of the ASSED up rules that Fisheries put on you in the first place. Ironic how Sporty's cry foul until it effects there bait supply.🤔

Your bait is definitely worth paying for

How to manage fishermen out of the industry

You want garfish by the ton let me know

Yet people keep voting in the same 2 political parties, thinking they’ll get change. Not ever going to happen. Put the greens last & the 2 majors just above them.

FQ need to take a good look at themselves

Refreshing to hear someone say it as it is.

Now you know why the prawners are blowing up.

Boot this Government next election, make sure whoever is in power next is on notice.

Here's the communique from the last Reef Line Working Group meeting.
I suggest commercial, charter, and recreational fishermen have a good read.
Based on recent stock assessments for saddletail snapper, crimson snapper, and red emperor (which are all publicly available on the DAF website) , there's most likely going to be significant changes in the future. Especially with saddletail snapper. ... See MoreSee Less

I think with the cost of fuel ..bait and fishing gear ..and maintenance..boats will stay in the shed and buying fish from a shop will be out of reach for most

The nail in the coffin for the line caught commercial fisherman.

Chris Bolton Fishing it will be very interesting to see what happens with the Spanish Mackerel as I get the feeling it may influence the Saddletail tail.

I could see this coming a while ago with the advancement of side/downscan technology that's readily available to the average person today, they will need to do something to counter the recreational catch increase of lmn & reds. Lets be honest, 9 nannies and 5 red emperor per person is excessive.

A good development to keep the industry and sector sustainable.

Saddle tail estimates between 12 and 81 percent biomass. How is that even an estimate ????

Won’t be anything left to catch soon. Spanish will be gone, Nannys gone, what’s next?

Chris Bolton Fishing in the media! 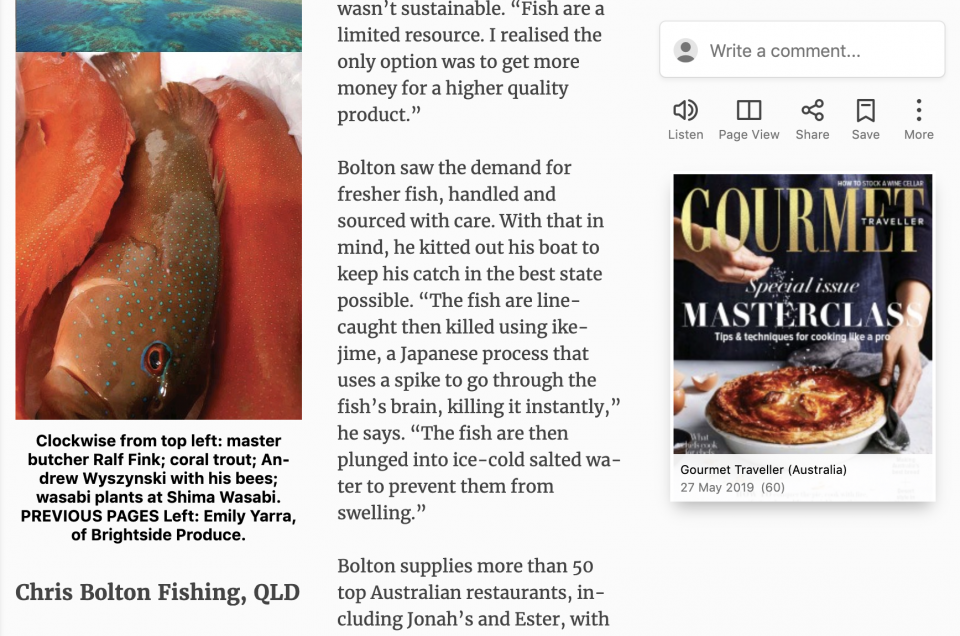 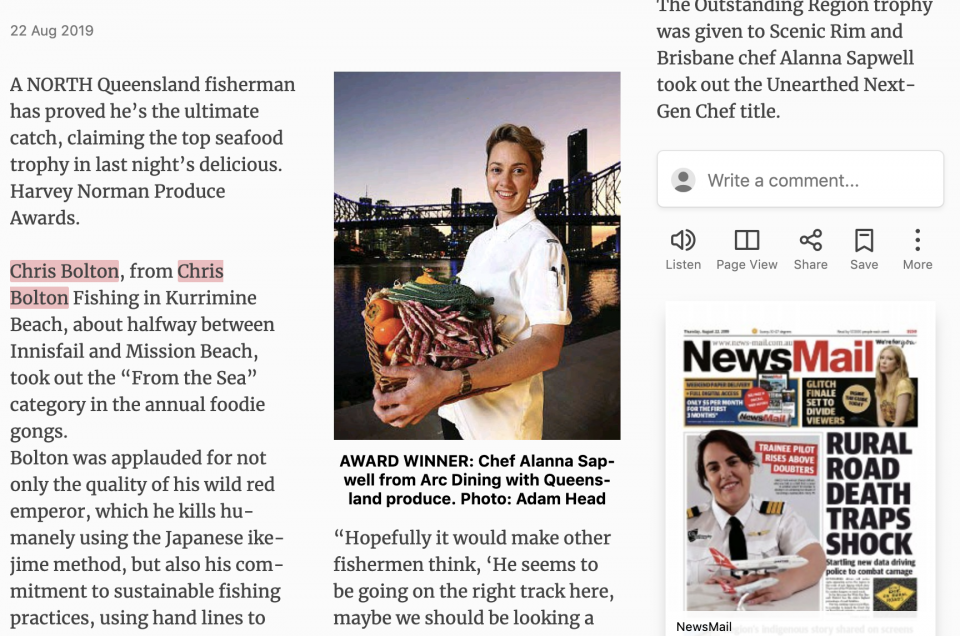 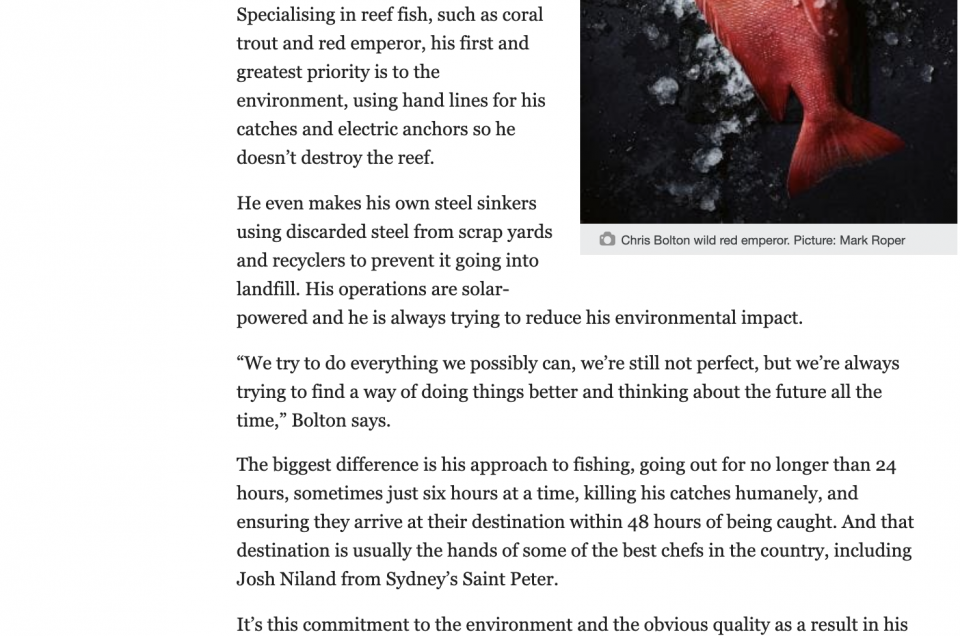 © Copyright Chris Bolton Fishing. All Rights Reserved. Photos not to be used without permission.